Sanskrit is the main liturgical language of Hinduism and used to be the lingua franca that helped all of the different regions of Greater India communicates with each other. Most of the greatest literary works to come out of India were written in Sanskrit, as well as many religious texts. Sanskrit is the language of Hindu and Buddhist chants and hymns as well. Today, only about 1% of the population of India speaks Sanskrit, though it is protected as a scheduled language and is the official language of one Indian state, Uttarakhand. (Source: Internet)

Our Founder, Raja Raibahadur Shewbuxjee Bagla, since the Temple’s inception, focused on imparting education in Sanskrit which has been duly carried on by the successors. We believe Sanskrit was never a dead language and it is still remains an integral part of Hindu journals, festivals, Ramlila plays, drama, rituals and the rites-of-passage. 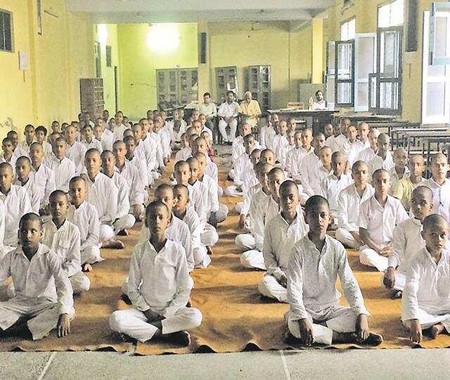 They say the essence of these texts are lost in translation, hence we are trying hard to make the millennial comfortable in this language so that they can also derive the same benefit from the texts given to us by our ancestors.

Everyday, the Guruji at Varanasi Temple, teach children how to read and write in Sanskrit and later how to read the different Religious Texts in the same language. A lot of our students have successfully become Sanskrit Scholars, teaching and propagating the wonderful language to others.